Automotive connecting rod production is not what it used to be. Gone are the days of vehicle engine platforms that would run for 10-plus years requiring connecting rods that basically remained unchanged design wise. Instead, today’s automakers, in efforts to reduce vehicle weight and emissions, continuously introduce new and smaller engines – with fewer cylinders, yet increased horsepower – at an average rate of every three or so years.

What these short-duration engine platforms mean for connecting rod manufacturers such as Metaldyne is that production operations must be even faster, more flexible and cost-effective than ever to keep pace with changing engine and rod designs. In doing so, the company’s operations in North Vernon, Ind., recently shied away from conventional dedicated line equipment and instead installed its first fully automated high-production cell comprised of versatile standalone horizontal machining centers (HMCs). 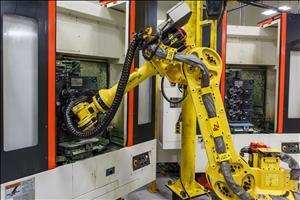 Metaldyne’s 180-person Indiana plant pumps out high volumes of connecting rods. Many different types and sizes of rods run through the plant’s manufacturing line that incorporates the automated machining cell among other line operations. Quite often, the line produces one type of rod one week and another the next week. The automated HMC cell gives Metaldyne the speed and flexibility to cost-effectively change rod types in just a few hours, as opposed to several days and the extensive cost its dedicated equipment would require. Metaldyne can also easily use the automated cell if the plant’s dedicated equipment ever goes down or in the case of a production pinch.

Perhaps most beneficial, the cell allows the plant to cost effectively take on the lower volume programs, for instance those requiring only half a million or so rods per year. Other connecting rod manufacturers with dedicated lines are often hesitant to quote these jobs because of the costly changeovers and retooling involved.

For its automated cell, Metaldyne worked with machine tool builder Mazak and its distributor Shelton Machinery. Two identical Mazak HORIZONTAL CENTER NEXUS (HCN) 4000-II Machining Centers and one Fanuc standalone robot, along with conveyors that shuttle parts in and out, comprise the cell. The horizontal machining centers deliver rapid traverse speeds up to 2,362 ipm at a 0.8 G acceleration rate. Their NC rotary tables rotate 90 degrees in 1.5 seconds and feature 0.001-degree minimum step for precise four-axis indexing and machining. In addition to two-pallet changing capability, the machines provide axis travels measuring 22.1” in X, 24.8” in Y and 25.2” in Z.

Metaldyne is a global leader in powder metal forged and fracture-split connecting rods, as opposed to those rods that are conventional drop forged. While powder metal forged rods offer numerous engine performance benefits, the newer advanced material powder mixes make them more machining friendly during the cutting process. However, connecting rods do take their toll on machines, especially in 24/7 high production environments. 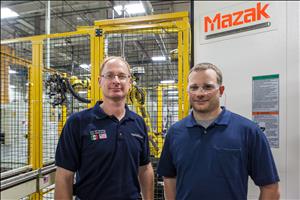 This is why, according to Greg Cunningham, process project engineer at Metaldyne, the plant chose Mazak machining centers over those from other suppliers considered for the cell. He said the HCN 4000-IIs possess the speed, power and rigidity to stand up to the rigors of ­nearly non-stop powder metal rod machining. Additionally, the machines provide the repeatability and precision for the company to easily attain its connecting rod tolerance requirements, which for some features can be as tight as 0.0002”.

Besides being made from new advanced powder forged material mixes, most of Metaldyne’s connecting rods feature what are known as trapezoidal (TP) ends. These are machined angles on both sides of connecting rod pin ends where pistons mount to the rods. TP angles can be six, 10 or 12 degrees. They reduce weight and create additional clearance so that automakers can use pistons with bigger pins, as is the case with today’s smaller extremely high-compression direct-gas-turbo type engines that produce greater horsepower and consume less fuel.

As demand for direct-gas-turbo type automotive engines increased, so too did Metaldyne’s orders for connecting rods with TP ends, thus driving the need for the automated Mazak cell.  According to Cunningham, the first TP-end order was substantial and from one of its major automotive customers. The plant earmarked the work for existing dedicated systems, which put the machines at their full capacities.

“We were at full output with our specialized machines and on top of that, the lead-time for the second project was extremely tight. There was no time to install another dedicated system,” explained Cunningham. “This is when we contacted Mazak, and instead of the year or more we would have needed to get another specialized machine, Mazak had the two HMCs here within four months. This short delivery time, along with machine capability and flexibility, definitely influenced our decision to go with Mazak, as did the fact that the company is close by.”

Cunningham explained that the plant’s dedicated, in-line transfer machines with gantry loaders provide “less” flexibility. The Mazak HMCs, on the other hand, not only allow the plant to machine other components, such as rod prototypes, they complete the TP ends on six rods every 56 seconds to outperform the dedicated equipment.

“For us, it is beneficial to have our suppliers relatively close to us and work with those that really understand our manufacturing goals and objectives,” said Cunningham. “Instead of just bringing in a machine and setting it up, Mazak understood exactly what we wanted to achieve and engineered a complete cell to accomplish that.”

Within the cell, the Mazak HMCs are set at inward angles so the one robot can load/unload both of them. On the machine pallets, tombstone workholding equipped with hydraulically actuated fixturing secures rods and allows for machining both TP-end sides.

The HCN 4000-IIs complete TP angles in one straight Z-axis-plunge cut using one of three different size inserted cutters – depending on rod size. This four second single-plunge operation can remove up to 0.180” of material for a six-degree angle, and as much as 0.360” for a 12-degree angle. Cutters plunge to these full required angle depths.

The Mazak cell runs completely unattended, although one person does quality checks, periodically checking just to make sure parts are feeding correctly and that there are no alarms caused by a part seated incorrectly in a fixture. The machines carry a lot of redundant tooling as well as sets of tooling specifically for each rod size that runs through the cell.

“For the cell, Mazak and Shelton engineers worked with us to ensure fixturing provided the most secure part holding and that changeovers were as fast and easy as possible,” said Cunningham. “They also proved out all the automaton prior to installation. Additionally, we had Mazak do all the programming for us because we wanted a complete turnkey system, and that’s what they provided. We will, on occasion, edit machine programming, but with the user-friendly Mazak MATRIX NEXUS CNCs, doing so is very easy.”

He added that the plant also plans to take advantage of Mazak’s training. Several of the plant’s machinists will attended the machine tool builder’s free operator classes.

Cunningham foresees continued growth for Metaldyne. Smaller engine platforms and the plant’s special ability to machine and offer high-strength lighter-weight rods from advanced powder metals will be the main catalysts for increased business.